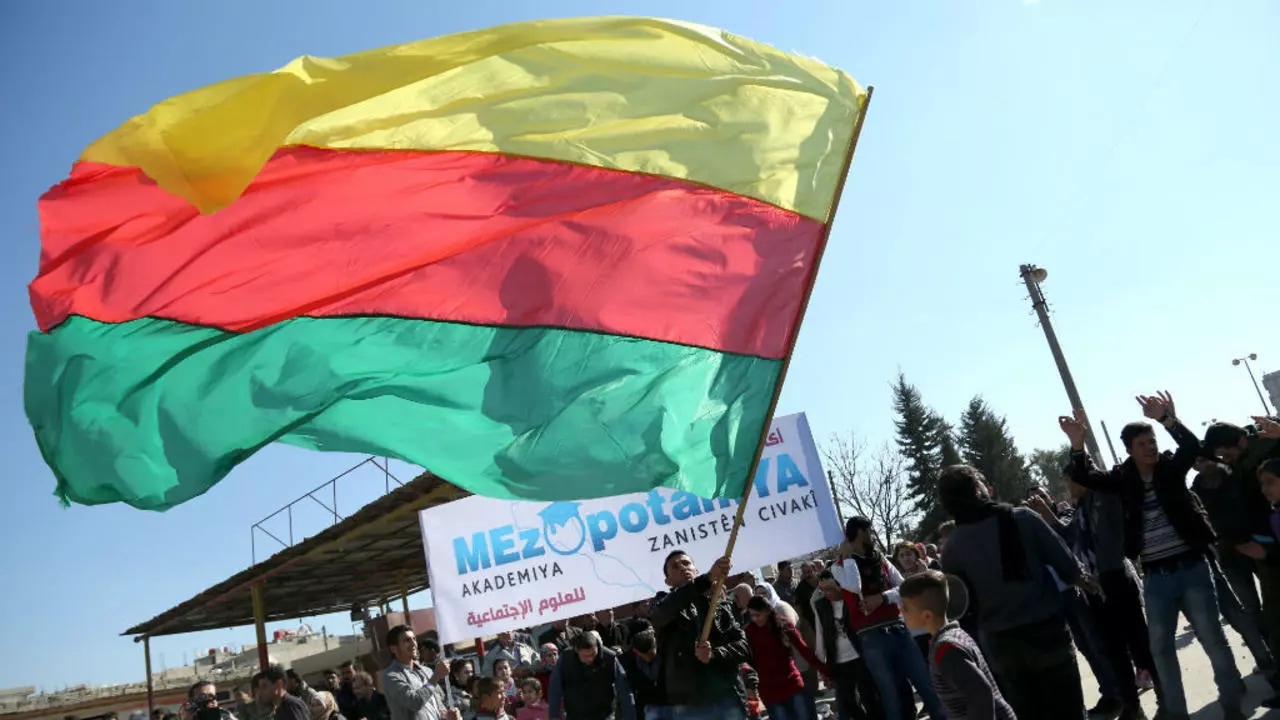 Aldar Xelîl, calling on the peoples of North and East Syria to strengthen the Autonomous Administration, noted that they will raise the struggle for the liberation of the occupied regions in 2021.

PYD Co-Presidency Council Member Aldar Xelîl made evaluations regarding the year 2020. Xelîl spoke to ANHA about Syria in general and developments in Northern and Eastern Syria.

The interview is as follows:

In 2020, the world and the Middle East experienced major crises. It has been a year full of wars, political, economic and social crises. How would you assess the year Northern and Eastern Syria left behind?

2020 has been a heavy and tough year for all Syrian peoples, and especially for the peoples of Northern and Eastern Syria. This year, the problems of the world system and the dirty wars had a strong impact on the region. For 10 years, Syria has been living in a big crisis. Consequently, this year has been a tough year for the people of the region. There were also big crises in Lebanon, Iraq and other parts of Kurdistan. Yemen, Tunisia, the Eastern Mediterranean, Armenia and Azerbaijan also went through deep crisis and war. The region was generally in crisis. However, the situation was slightly different in Northern and Eastern Syria. This region is a part of Syria where the crisis has been going on for many years now.

In 2020, there was no progress towards a solution, in fact, there were no signs of a solution. The presence of armed groups further deepened the occupation and crisis. For the people of North and East Syria, 2020 started with the consequences of the invasion of Girê Spî and Serêkaniyê. Two years ago, Afrin was occupied. This shows that the crisis is growing and the region is experiencing a state of crisis.

Despite all the attacks and obstacles, observers describe the general situation in the region as successful in social, economic and other areas of life. What do you think is the reason for this success?

The attacks on Northern and Eastern Syria had not been carried out in any other region. Now the Turkish state is directly attacking. Before, there had been attacks by ISIS, Al-Nusra and other mercenary groups. Before that, there was the pressure and domination of the regime. The heaviest of these was the attack by the Turkish state. Despite this, while other parts of the country were devastated, we continue to strengthen our system, except, sadly, in the occupied in our regions.

There have been developments in the social system, mentality, administration, education and defense system. So there is a revolution that recreates itself. However, this is not the case in other parts of Syria. The regime is dominating in some regions and we know what that means. Other regions are also in the hands of the Turkish state and its mercenaries. These mercenaries which lack a democratic culture are directed by Turkey and other foreign powers. They cannot create an atmosphere of trust in the places they occupy.

However, there is a Democratic Autonomy system in the Northern and Eastern Syrian regions. This system is based on the Democratic Nation understanding. All peoples live together under a democratic system. A free and democratic system and society based on gender equality is being created for women and men. All this allows the region to develop by overcoming difficulties despite all kinds of attacks and pressures.

The attacks of the Turkish state and its mercenaries against the Northern and Eastern Syrian regions continued in 2020. What can you say of the people's resistance?

The Turkish state intervened in Libya, Azerbaijan, Armenia, Somalia, Kashmir and many other countries. No visible resistance emerged in these places. But here the situation is different.

Turkey wants to seize the whole of northern and eastern Syria. Now, attacks and clashes are taking place in Ain Issa and the surrounding villages. So Turkey has not stopped the attacks but the resistance of the people has undermined the Turkish state plans.

How do you evaluate the attitudes and projects of some circles that call themselves the opposition for a solution in Syria in 2020?

These groups showed their true faces to the whole world, especially in 2020. Someone who did not know these groups well had not made an accurate assessment. However, in 2020, it became clear that these groups were mercenary groups, working for money and not representing any revolution. Previously, they were showing themselves as representatives of the Syrian people's revolution in the press. However, it now appears that they are managed by money provided by Turkey and Qatar. They also attacked our regions in 2012 but could not achieve their goals because of the strong resistance. In 2018, 2019 and 2020, they attacked our regions together with the Turkish state. These mercenaries claiming to be allegedly anti-regime were directed to our regions. Because Erdogan and the Turkish state had told them not to turn to Damascus, but to attack Northern and Eastern Syria. In 2020, these groups pretending to be Syrians have been deployed Libya, Nagorno Karabakh and other regions upon the request of Turkey. Now everyone knows they are mercenaries and they work for money.

What is the purpose of Erdogan who orders the mercenary groups to attack Northern and Eastern Syria?

Erdogan does not want the democratization of Syria, and also wants the existing dictatorial system to continue. He does not tolerate even the slightest nucleus of a democracy in Syria. Keeping Bashar Assad in power is not a problem for Erdogan, but building a democratic system in Northern and Eastern Syria poses a problem for him. He uses mercenary groups to prevent the democratic system from succeeding. The other purpose of the occupation is to annex some territories to Turkey.

In 2020, there were international developments to solve the Syrian crisis. Discussions were held about the Syrian Constitution. How do you evaluate them?

As you know, the UN Security Council took the decision numbered 2254 for the solution of the Syrian crisis. UN representatives were assigned on this issue and started to bring the circles in Syria together. The aim was to develop a solution project. However, there has been no visible improvement in the Syrian crisis, which is now in its tenth year.

There are many reasons for this. Most importantly, most of those who define themselves as the Syrian opposition are not related to Syria. All of them are actually acting for the Turkish state and Qatar. They have no democratic projects. Another reason is that the Syrian government does not approach the solution issue seriously. The third reason is that the states involved in the Syrian crisis ignore the solution attempts by considering their own interests. Each country is working for its own benefit. Nobody listened to the suffering of the Syrian peoples. In 2020, nothing tangible was done to solve the Syrian crisis. For example, negotiations were held for the Syrian Constitution.

The biggest problem in these meetings was that the Syrian peoples were not fully represented. As a result of the pressure of the Turkish state, not all peoples in Syria were included in the negotiations.

We would believe that these states are serious only if the democratic project owners are invited to the solution negotiations.

How do you evaluate the attitude of the Syrian government towards the solution talks? How successful has the Autonomous Administration's diplomacy been with the Damascus government?

We stated that we want to be in dialogue with the Damascus government since the beginning of the Syrian crisis. Despite the economic crisis in 2020, the enactment of the Caesar Act and the sanctions against Iran, which will affect Syria, the Syrian government did not take any step towards a solution. There were some attempts, but these could not be carried to a higher level. Although we wanted Russia to mediate in these negotiations, we could not get any results.

We hope a strong dialogue will develop in 2021. Because the government now needs to see the facts and face them. They are getting weaker every day. The government is in a very difficult situation. The way out of this situation is to make peace with the Autonomous Administration. Such a step would be the beginning of the solution to the Syrian crisis.

Another issue on the agenda of the Rojava peoples was national unity. When you look at the negotiations between Kurdish circles today, what does the picture show us?

By ensuring Kurdish national unity in 2020, we wanted to realize the unity dreams of the Kurdish people. Upon the request of the SDF General Command, as PYD, we carried out various initiatives together with the PYNK. With the mediation of the USA, we started various negotiations with ENKS.

ENKS has been outside of Rojava until now. The front they are in is not a front that respects the interests of the Kurdish people, they are on the front of those who occupied Afrin. We are of course against a Kurdish organization to take part in this occupation, we do not see it right.

An important step towards unity was taken with the talks that lasted for a few months. There were some disagreements, of course. This was about management in general. ENKS wanted half of the Rojava administration to be handed over to it. Apart from that, they wanted the social contract to be changed. The social contract had some controversial clauses. Like the education and co-chair system… The discussions on this issue also reached an important stage. The talks were then halted due to the upcoming US elections and the return of the US representative to Washington. It is difficult to predict when the talks will continue. However, we can say that 2020 is a year of important developments for national unity.