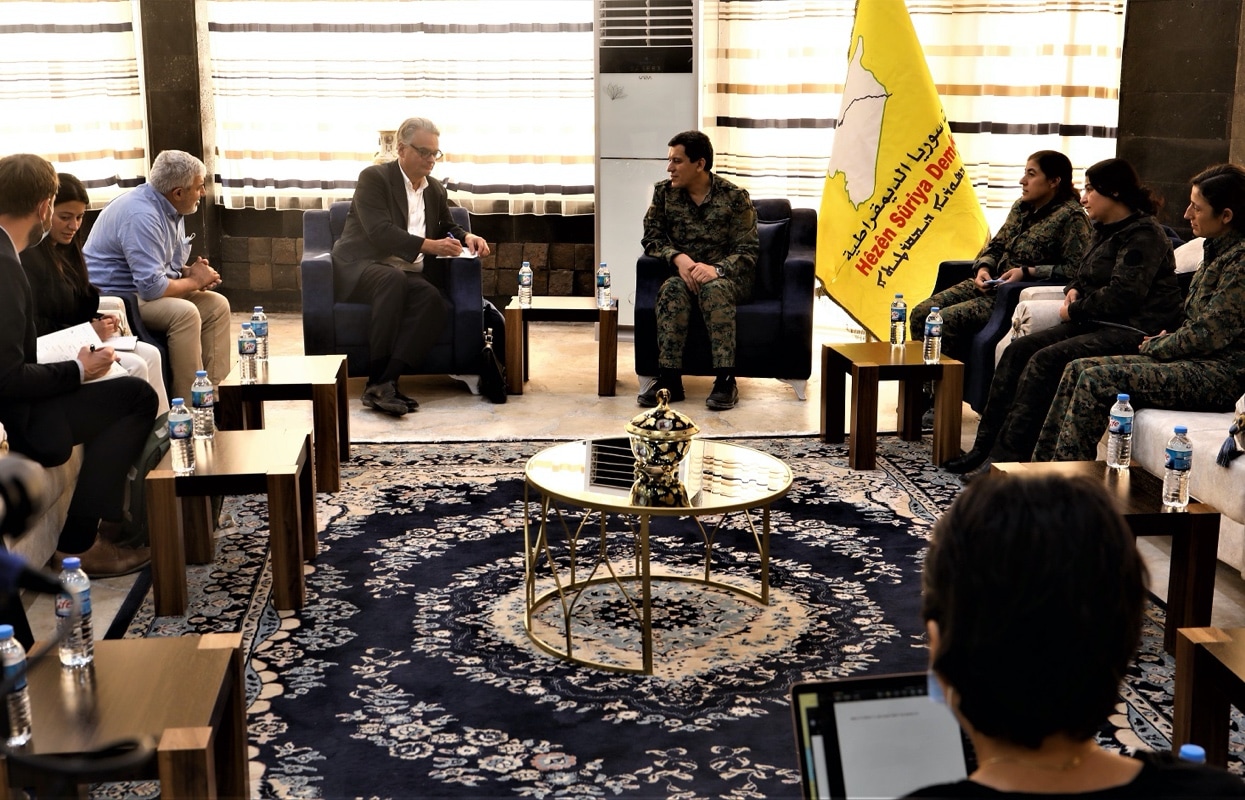 Representatives of the Foreign Ministry of Sweden continue their visit to the NE Syria, in addition to continuing to hold meetings with the institutions of the Autonomous Administration as delegate met this afternoon, the General Command of the Syrian Democratic Forces, at the headquarters in Al-Hasakah.

Last Saturday noon, the delegation that arrived through the border crossing of Semalka to the regions of NE Syria, included the following members: the head of the delegation and the special envoy of the Syrian office in the Swedish Ministry of Foreign Affairs, Per Ornius, the representative of the humanitarian office at the Swedish Ministry of Foreign Affairs, Thomas Marcus, and the advisor at the European Peace Institute Avin Gettin ".

As part of the delegation’s visit on its third day, the members met with the Women’s Council in NE Syria, and the General Command of the SDF. Specifically, they were received by the Commander-in-Chief of the SDF Mazloum Abdi, the leader of the Women Protection Units Newroz Ahmed, and the forces official spokesperson, Nasreen Abdullah, the head of the SDF relations, Redur Khalil, and a number of leaders in the SDC.

The Commander-in-Chief of the SDF Abdi, welcomed the visiting delegation, while the head of the delegation and the special envoy of the Syrian, Ornius indicated that this visit comes following the Swedish ministry's last meeting with the Turkish Foreign Ministry, and upon its request for conveying a message of Sweden's ongoing cooperation and solidarity with the region.

"The NE Syria regions have witnessed change since my last visit in 2019, because some of those areas that I visited are now under Turkey's control, and this is sad issue and we regret it." He said.

Regarding the focus of the two parties during the meeting, the leader of the Women’s Protection Units, Newroz Ahmed, stated the following: “We have focused on the overall necessity of the ongoing relations until the elimination of the remaining ISIS cells and protecting the international community from its danger.”

Together, we discussed means of supporting the region political and military, and solutions regarding ISIS detainees in the SDF prisons and their families, how to build strategic relationships that serve the region. Regarding the Kurdish internal dialogue but among other components as well. " she added.

After the meeting it was decided that representatives of the Swedish Foreign Ministry will hold a meeting this evening with the Kurdish National Unity Parties.