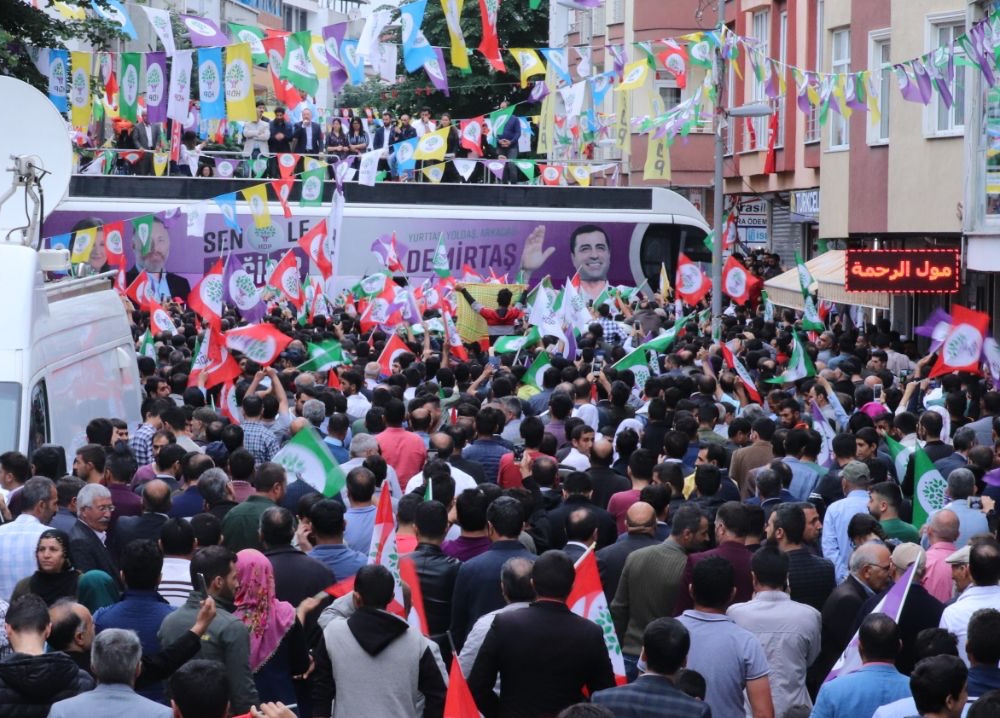 Seventeen more members of the HDP have been arrested, including the co-mayor of Kars and former MPs and Central Executive Board members.

The statement reads as follows:

The Court justified these arrests mainly with a tweet posted on behalf of HDP Center Executive Board (dated October 6, 2014), which invited people to protest in solidarity with the people of Kobane against the ISIS and Turkey’s embargo on Kobane at the time. During the protests 43 to 53 people were killed; the overwhelming majority of them were HDP’s members or sympathizers and were murdered with Turkish police gunfire. President Erdoğan has been accusing HDP leadership of inciting violence by calling for protests. This charge is a move to turn the reality upside down. It is true that the HDP called on people to protest the siege of Kobane by the ISIS. But it was the responsibility of the government and the Ministry of Interior to protect both the protestors and their right to peaceful protest. Instead, the police killed dozens of people with gunfire, starting with the murder of a young Kurdish protestor in the Varto district of Muş province on 7 October 2014. During the protests, the Minister of Interior Efkan Ala himself told HDP deputy Sirri Sureyya Onder that he “could not control unruly elements within the police.” Moreover, HDP deputies have so far tabled several proposals to set up a parliamentary commission to investigate the protests, reveal the truth, and help to clarify the provocateurs and instigators of violence. But all of these proposals were rejected by the ruling AKP-MHP alliance. To the best of our knowledge, so far no single Turkish police officer has been prosecuted for these murders. Adding insult to injury, the government is now, that is, six years after the protests, using puppet prosecutors and judges to put the blame on and punish the HDP for these murders.

In the meantime, 7 of the 21 HDP politicians who were detained in Kars on October 1st were suspended on the same day from their duties as local administrators on the grounds that they were being investigated for “membership in a terrorist organization.” The suspended local politicians of HDP are Co-Mayor of Kars Ms Şevin Alaca, Deputy Mayor Ms Muazzez Çağrı Tekinci, Provincial Council members Ms Halil Kan and Ms Suat Bayhan, and Municipal Council members Mr Kaya Naki, Mr Fahrettin Kaya, and Mr Ömer Albayrak.

As we underlined in our note dated October 1st, these detentions and suspensions from duty in Kars came right after the statement of co-mayor Ayhan Bilgen on September 30th. Bilgen announced through his attorneys that, if no trustee were already appointed until the end of his detention period, he would still resign from office as the mayor of Kars. Such resignation could have prevented the appointment of a trustee by the Ministry of Interior and given an opportunity to the municipal council to elect a member of the council as the new mayor. The Ministry destroyed this opportunity by arresting Mr Ayhan Bilgen, detaining and suspending from duty co-mayor Ms Sevin Alaca and other municipal council members, and appointing the governor of Kars as the “trustee” to replace Mr Ayhan Bilgen right after its arrest. We really do not have any other words to describe this shamelessness: this is the current state of democracy, human rights and rule of law in Turkey.

The Turkish government has so far appointed 48 trustees to replace HDP mayors elected on 31 March 2019. In addition, 6 mayors who had won the elections in 2019 were denied their election certificates with the excuse that they had previously been dismissed from their jobs by emergency rule decrees. 36 HDP co-mayors elected in 2019 have been jailed so far. Of them, 16 are still behind bars. The cases against those released are pending. Based on our previous experiences and the current state of the Turkish judiciary, we expect that almost all of these mayors will receive prison sentences. In addition, over 20 of the more than 80 Kurdish mayors who were arrested in the previous term (2014-2019) are still in prison.

This last wave of arrests is not just as an attack on HDP’s leadership, mayors, and municipalities; it is simultaneously an attack on the very resistance and victory of the people of Kobane against the ISIS in 2014. The Turkish government has been trying its best to criminalize the resistance of Kobane, damage its international reputation, and target those who have shown solidarity with Kobane, first and foremost the HDP. Moreover, if the US and Russia turn a green light, Turkey would not hesitate even for a second to attack Kobane and complete the task that the ISIS could not in 2014.