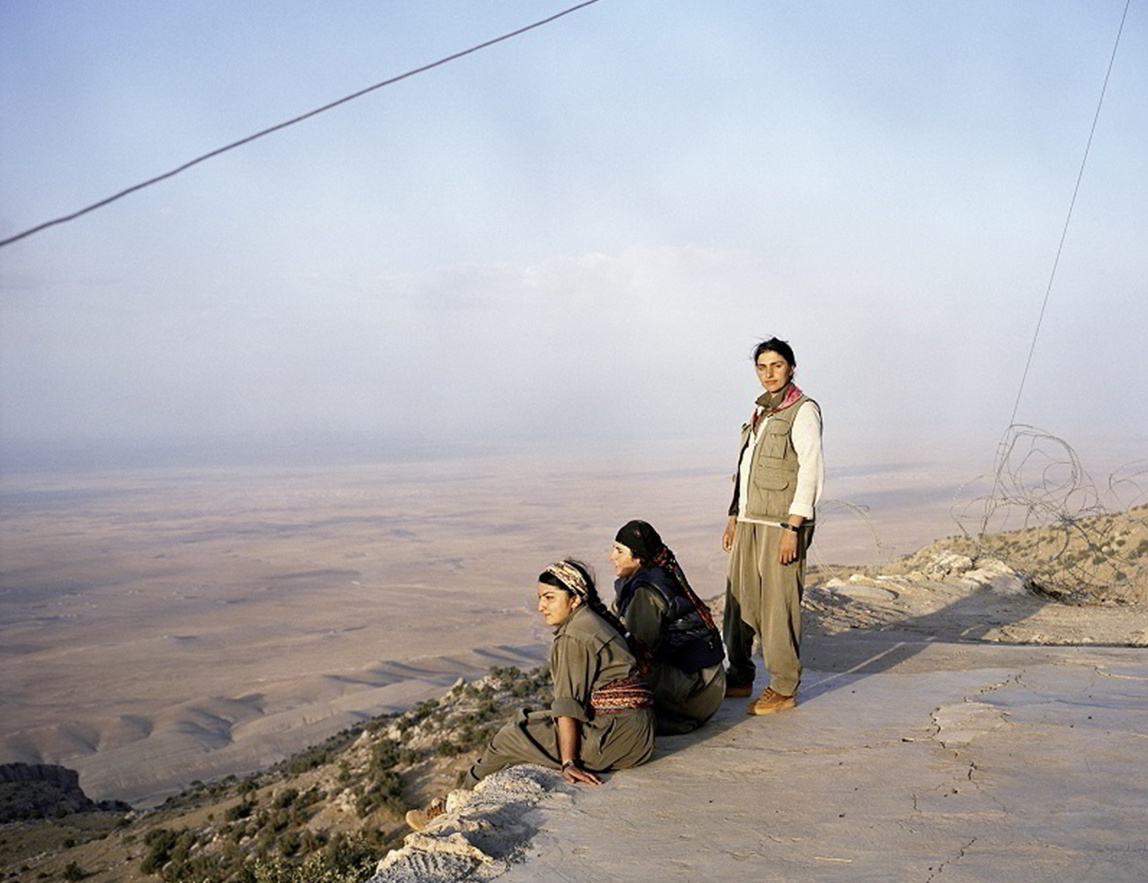 Dressed in a military outfit, military belts and rifles, they are the symbols of unparalleled courage, the conquerors of terrorism, intolerance and fanaticism, the role models for women's rights and equality.

They are the Amazons of the Kurds.

The position of women in the Kurdish society is perhaps unique in the world. It symbolises the Kurdish struggle for freedom and political rights. As the Kurdish people fight the tyrants and occupiers over time, the Kurdish women are waging their own struggle against inequality and oppression. This is why for many years they have been able to enjoy broad and substantive political equality, with equal rights and participation in decision-making, at a level globally unprecedented.

For instance, in the political leadership and government positions of the Kurdish people, there is a much larger number of participating women than in the western countries. In particular, the local Kurdish administration is made up of 30% women, while participation in political leadership positions in the United Kingdom and the United States amounts to 22% and 19% respectively.

What is more, the Kurdish women are first in the world in female fighters. 40% of the Kurdish military is made up of women, followed by Israelis, with 33% of the country's armed forces being female. For the Kurdish society, women's participation in the army is a natural element of their identity. The Women's Protection Units (YPJ) are also part of the Kurdish Armed Forces. With a philosophy of equality and women's empowerment, and with courses in discipline, psychology and self-defense, the YPJ attracts many young Kurdish women.

The Women's Protection Units are armed military groups fighting for the rights and security of the Kurdish people. They are defensive units of the citizens in their ancestral homes.

But the important thing is that they consist exclusively of women fighters, who fight jihadist Arabs and Turks, terrorists and imperialists, who have illegally invaded Syria and Iraq and are engaged in massacres and war crimes.

The ideological concern of the YPJ fighters is the protection of the environment, equality issues (ethnic and religious), and to address attacks on women, children and the less powerful. The self-determination of women and the rejection of all forms of oppression - national, sexual, physical, cultural - were essentially transformed into self-control and emancipation, which led them to take up arms to protect their own lives. This was in essence a grassroots movement, which was born organically from Kurdish society itself. Today, the YPJ has succeeded in bringing women to power, empowering them in society and the country.

Shortly after the liberation of Raqqa in Syria, a YPJ fighter, Shanda Afreen, explained why her military organisation was fighting: "Our leader, Abdullah Ocalan, has focused on women's freedoms, and that is why we are fighting to liberate women by liberating people mentally. "

Helin, a 24-year-old veteran, says: "When you face an opponent, it doesn't matter if you are a man or a woman. There are difficulties but we just overcome them. Our only goal is the victory over the enemy".

In the same vein, Meetan explains that "we are fighting ISIS but we are also fighting the inequalities of society. Our army symbolises women's liberation. By joining the army and fighting on the front lines of the war, we declare that we are equal to men. We carry heavy weapons and drive armoured vehicles - this is how we break the ancient stereotypes ".

Administratively, they join the Kurdish People's Defense Units (YPG) in the Kurdish security forces, but retain the head of their organization, with decisions taken at the local level of military councils. At the same time, they can conduct independent military operations. A fighter of the organization in Afrin, Halide, claims that the YPJ is fighting side by side with YPG fighters and explains that "we give morale and strength to each other. They support us morally and we support them. "Because we are fighting for the same cause."

Women can become volunteer members of the YPJ regardless of their nationality, and today the Kurdish, Arab, Assyrian and Syrian communities are represented in their ranks. Due to the universal feminist message of the YPJ, women from all over the world have become members of the organization, such as the 26-year-old British Anna Campbell, who recently lost her life defending Afrin until the end of the Turkish invasion of Syria.

On Anna's unjust loss, the YPJ said: "Her martyrdom is a great loss for us, because with her international soul, her revolutionary spirit, which proved the power of women, she expressed her will in every act. On behalf of the Women's Protection Units, we express our deepest condolences to her family and promise to follow the path set by Anna. We will represent her in all of our fights".

One of the YPJ's biggest successes is their contribution to the successful defense of the Kurdish city of Kobani, in Syria, from ISIS terrorists, who were supported by Turkey. The women fighters took part in the battle for the Kobani that took place from September 2014 to January 2015, and were admired for their participation and courage. Almost 40% of Kobani’s defenders were women. The ISIS jihadists who attacked the city were scared and afraid of them, because the terrorists, according to their foreign ideology, feared that if they died from a woman, it would be a disgrace and would deprive them of the afterlife in heaven. To this, 19-year-old Sterek Judhi, who fought in Kobani, replied: "I am glad because in this way I can send some of these jihadist terrorists where they really deserve - to hell." Veteran fighter Newroz says that "they ask us if we are afraid of Daesh (ISIS), and we answer that Daesh is afraid of us".

The glorious Kobani remained free and undisturbed as a modern "Messolongi", and the women of the YPJ wrote in indelible letters their own chapter in the epic of the Kurdish city. This, after all, marked the beginning of the end for the inhuman organization called ISIS, which suffered its most important, symbolic and total defeat.

A Pyrrhic victory was the liberation of Manbij in Syria from the jihadists in 2016. The YPJ participated in the allied operation with the dual goal of liberating the region and cutting off ISIS from supplies they received in the north from Turkey. The operation was a success and the YPJ defeated the jihadists and their Turkish sponsors. However, the blow to the reputation of the Turks was so great that they were forced into immediate and general military intervention, in order to retake the area, for the sake of the terrorists.

The women of the war also pay their share of losses and injuries. One of the heroines of the Manbij war, 17-year-old Belkin, although severely wounded by bullets in her spine, was never demoralized, and shortly after the battle she stated: "I underwent two surgeries and I still cannot walk normally. It is difficult to move with the iron rods on my spine. But as soon as the doctors give me the green light, I want to go return to the battlefield immediately."

Equally important was the role of the YPJ in Iraq, particularly in the Sinjar region and the siege of the city by ISIS terrorists. After a first defeat of the Kurds by the clearly stronger-armed jihadist troops, thousands of civilians and residents of Sinjar were forced to flee their homes. These are members of the Yezidi community, who were forced to seek refuge on Mount Sinjar. It took months to successfully deal with the terrorist threat, and from August to December 2014, YPJ units offered protection and humanitarian assistance to the residents, providing them with food, water and first aid throughout the siege.

Saving thousands of Yezidi lives, including children and women, the YPJ has demonstrated in practice that women's security forces combine the protection of the population, through their strength of arms, while also providing care and assistance to the weak. This is, after all, the nature and power of women. This is the nature of YPJ fighters.

The YPJ against terrorism

True to their sacred purpose of protecting and safeguarding human lives, YPJ women have been at the forefront of the war against terror in Iraq and Syria, successfully confronting one terrorist group after another: ISIS, Ahrar Al -Sham, the Al-Nousra Front and other Al Qaeda gangs in Afrin, Aleppo, Tel Hamees and Sinjar. Dilisan Omer, a member of the organization, claims that women fighters will continue to defend the lands and security of the Kurdish people: "Everything for our lands, everything for our honor."

The YPJ was also an integral part of the intelligence network that led to the death of ISIS leader Abu Bakr al-Baghdadi in 2019. The female fighters were also present at the liberation of Raqqa after four years of jihadist occupation, and contributed to the operations of clearing out the city, putting a final end to ISIS terrorists. Upon asking what inspired them to be on the ruthless battlefield of Raqqa, the YPJ fighters explained that "we participated for the Kurdish cause", while 20-year-old fighter Avrim Difram added that "women were particularly oppressed by ISIS - we fought to liberate the women of Raqqa ".

Today, the Kurdish YPJ forces are launching a manhunt to dismantle the last pockets of ISIS, while also organizing groups to protect farmers' properties and fields in the Kurdish areas of Syria and Iraq, which are being targeted by jihadists. At the same time, female fighters are proving to be ideal for policing refugee camps in Kurdish-protected areas, and dismantling ISIS-affiliated women cells in the camps. Above all, however, the heroines of the YPJ are raising their stature to once again protect the Kurdish people from the new cycle of violence and terrorism that Turkey is unleashing against them. The Kurdish fighter Delal, speaking on a Greek channel from Northern Syria, declared towards all directions that in the face of Turkish crimes, "the reaction of the YPJ can only be one thing. To defend itself and its sisters".

At the same time, the role of the fighters is not limited to the battlefield but extends to the whole of social life, with YPJ women standing out in the economic field, but also with active participation in public life, as activists and politicians.

In an era of geopolitical turbulence and social injustice, a groundbreaking revolutionary organization like the YPJ is a beacon of hope for all of humanity. With love for the homeland and for fellow human beings, with an ideology of progress and participatory democracy, the Kurdish "Amazons" seem determined to defy all adversity, to fight colonialism and imperialism, and to safeguard peace and prosperity.

In addition, the founding and operation of the YPJ, means a lot to the feminist movement, providing strong symbolism in favor of gender unity, human rights and democracy itself. Fighting against the tyrants and imperialists in the Middle East, against the policies of ethnic cleansing and genocide by the Turks and others, the women of the YPJ do not only fight for security, equality and democracy, but also for the freedom of the people.

They are thus a model of social resistance and women's empowerment for the entire planet.